Leave a note for Eddie

If you have an anecdote about Eddie Fenech Adami or would like to share your thoughts about him, do so below. All comments are moderated and uploaded after a short while.

» There needs to be more people like you Eddie!

Thank you Eddie,
for uniting our country! In these dark times today, we need someone like you to repair what others are doing to our country. Abusive power is something which you always hated. You are such an inspirational person and it pains me that today nobody can replace what you did for this country. I therefore thank you for making our country what it is. However, it is such a shame that what you have done, is currently being destroyed and abused by others. You have tought us many things but I think the most valuable is to never ever give up “Is-Sewwa Jirbaħ Żgur” and to stay united and not divided.

All the best wishes for your upcoming birthday Dr. Fenech Adami.

Eddie, the one and only. Never had Malta seen such a statesman and I believe that we wont see another!!
Truly inimitable. Kind, compassionate, clever and smart.
He never said words he didn’t mean, and always thought wisely what to say.
My only regret was that we didn’t get to have more time with him at the helm, and obviously, the heartbreak of the 1981 general elections.
Thank you Eddie, your name will remain the greatest in Maltese political history!!

Eddie, you are the greatest prime minister this country has ever seen. Only god knows what would be of Malta today had it not been for you!!
You kept the public calm when our election win was stolen. Imagine if you had been hard headed and stubborn like Mintoff, and sent people to fight in the streets with other Maltese nationals! What a disaster it would have been for Malta to have a local war between Maltese citizens!!
You are beyond a hero.
Bad people tried to scare you off by intimidating you, your loving wife,god rest her soul, and even destroyed your own home! How low can one go!!! And nobody was ever questioned about all this! We lost Raymond Caruana, Nardu Debono, again with the guilty ones still at large! To top it all off, Peter Paul Busuttil had to pay the punishment for someone else!! May he rest in peace!
The worst times of our country, by far, yet you stood strong, you knew that Malta needed you more than ever, and fought through!
And boy was it worth it for our country! From the worst times ever to the BEST times…….ever!! That 1987 election!! Wow, magical, just magical.
My mum loved you, she used to break into tears whenever she saw you speak. Her best friend was the wife of someone who was quite close to the party in those days and she couldn’t believe it when they invited her to the palms wedding hall where you were going to be holding a reception. She was so pleased when she managed to have a photo taken with you,You could see just how happy she is in this photo!
We lost my mum just a couple of years after the 1987 election unfortunately, but I can still picture her feeling so happy and jubilant when we won. To this day whenever I see a picture of you I remember my mum!!
Thanks for everything that you’ve done Eddie, leaders come and go, prime ministers come and go, but there will only ever be one who truly deserves to be called “Missier Malta”, the one and only…..EDDIE!!!! 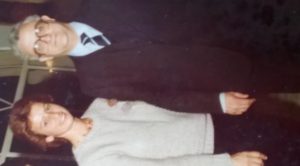 I have both of your books and would love if you could sign them one day. I love the history you’ve brought to our country, and how you’ve shaped it to be what it is. Thank you!