Leave a note for Eddie

If you have an anecdote about Eddie Fenech Adami or would like to share your thoughts about him, do so below. All comments are moderated and uploaded after a short while.

Thanks for your courage and vision, by always steering Malta in the right direction, and convincing the nation to follow you in very difficult times. Modern Malta, as we know it today, is thanks to you.

It is thanks to Eddie that Malta came forward in leaps and bounds after the years of uncertainty, violence, threats, corruption and worse that we suffered under Labour.

It is important that history is kept alive, because it is our duty to remind the younger generations, lest history repeats itself – as, sadly, we are seeing at the moment, with this corrupt government.

You have done a wonderful job with coming up with the idea of this website, because it not only serves the above purpose, but because it is the least that could have been done in recognition of all Eddie has selflessly sacrificed and endured for the good of Malta.

Thank you, Eddie – Malta is indebted to you!

» Eddie – a political colossus for Malta

Undoubtedly Eddie was one the heavyweights of all time in Maltese history. His political achievements are second to none and will be part of the golden moments of our times. All Malta, irrespective of any political allegiances one might follow, should respect him for his input into our political environment to achieve the status we have today. 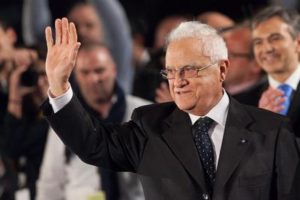 » EU, a stepping stone to a brighter future.

I was never heavily involved in politics and never kept myself updated with political debates or election fever. However, the period building up to the EU referendum made me rethink about my opinion on politics. In Eddie I saw a man who truly believed in the greater good for the country and always placed us before himself. I saw a man who was willing to sacrifice all his energy on reaching that one goal which he believed would make Malta better. I therefore want to take this time to say: THANK YOU EDDIE! Primarily I want to say thank you for making Malta a better and more attractable place to live in both through what you fought for before the EU referendum and also for the good brought about by our accession into the EU. Also, I would like to thank you for our accession into the EU because by virtue of this, I was lucky enough to experience overseas studies which came about through EU programmes at University, allowing me to broaden my studies and experience things I would have never experienced if it weren’t for what you have brought to this country. 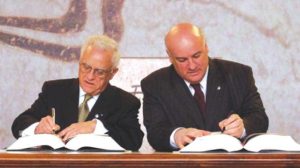 » Modern infrastructure for a modern Malta

When Eddie Fenech Adami was first elected Prime Minister in 1987, the economy was in shambles. In the previous 5 years, private sector employment declined by nearly 11% and tourism was stagnant. He immediately realised that if he wanted the economy to recover and grow into a modern expanding economy his government had to invest in the country’s infrastructural facilities. His government started an aggressive investment process – new power generation facilities, Freeport, airport, desalination plants, telecommunications, health, education and inter-island transportation. He laid solid foundations for our economy to flourish, the people will be forever grateful.

“George Borg Olivier was a Statesman, Dom Mintoff was a politician, but Eddie Fenech Adami was both”.

He has written a new page in the Maltese history with his Foresight, Leadership, Stability, and most of all his Governance. A God Sent for the country. His leadership was, above all, an example to one and all.

May god keep his hands on him for all his family to enjoy.