Eddie through the lens

Browsing through this collection of photographs documenting moments in the public life of Eddie Fenech Adami in the eighties is like stepping into a time hole.  I remember those days vividly and am sure that I appear in some of the images, albeit as a little unrecognisable dot in the ones which show large crowds.

The photos, which I imagine were mostly taken by the photojournalists working for Independence Print, vary a great deal in technical and artistic quality.  Many would have undoubtedly been flung straight into the spike pile, being totally unsuited to publication because of poor composition, poor focusing or too much camera shake.  You have to keep in mind that these were shot on rolls of film – a photographer was severally limited in the number of images he could shoot at a given event, unlike the situation today in which you could come away from such an event with thousands of images.  Also, there was no way for the photographer to know if he got the shot he wanted till well after the event was over and the film developed.

Nowadays, with digital cameras we know there and then if the picture’s worked, and if it hasn’t, we can often try again or try improve on it.  Yet even so, with the passage of time, they become intriguing as you start looking at the minor details within the frame – It can be something as insignificant and flippant as noting how hairstyles and fashion have changed over the years.  On the other hand, there’s an element of spontaneity and improvisation at mass meetings that has been lost over the years.  These were the days before Party TV stations – nowadays, such events are all highly stage-managed – they’re all about being image conscious, looking good on television.  You won’t see party leaders or candidates being carried shoulder high through throngs of people, or riding in open top SUVs inching their way forward through a packed crowd.

Greeting crowds during a mass meeting

If I had to pick one picture out of the whole set that really caught my eye, I’d opt for the one showing a boy, sprinting across a car park, while carrying a large party flag showing a composite of party emblems and the words “Eddie il-Mexxej tal-Maltin”.  It’s a quick grab shot – the photographer had to react instinctively to capture the moment.  It’s far from being the perfect image – I’d have liked to see the whole of the boy’s shadow, for one thing, but it still works beautifully.  The scene is backlit, shadows are a deep black and the only bold colours are those of the party emblems and the word “Eddie” on the flag, together with subtle greyish-blues on a couple of the vehicles and the boy’s T-shirt.

The overhead pictures showing large crowds at mass meetings were essential propaganda tools for all sides back then.  It was important to show that ‘we had more people at our meeting than they did’.  Every Monday morning (mass meetings were regular Sunday events, and not only during electoral campaigns), together with the newspaper, one could buy a large poster showing the massive crowd at the previous days mass meeting, and we’d spend ages poring over the poster trying to spot ourselves in the crowd.  It was the necessity of these kind of images that led to newspapers investing in costly ultra-wide photographic lenses for the first time.  It wasn’t about art or about photography itself, but simply propaganda.  Yet, one such image utilising the fisheye lens in this collection has a gorgeous colour palette.  Menacing clouds loom overhead, and the photographer, whilst slightly off centre through no fault of his own, has waited for the moment when the tiny figure of Fenech Adami raises his arm, rendering him more visible.

The use of posters showing portraits of politicians is another practice that has all but disappeared over time.  Back then walls along streets, often on private houses, would be covered with such posters – wherever you went, you’d have the faces of electoral candidates staring down at you.  I still remember the indignation we felt when the facade of our family home was plastered overnight with several of such posters from both sides of the political divide. 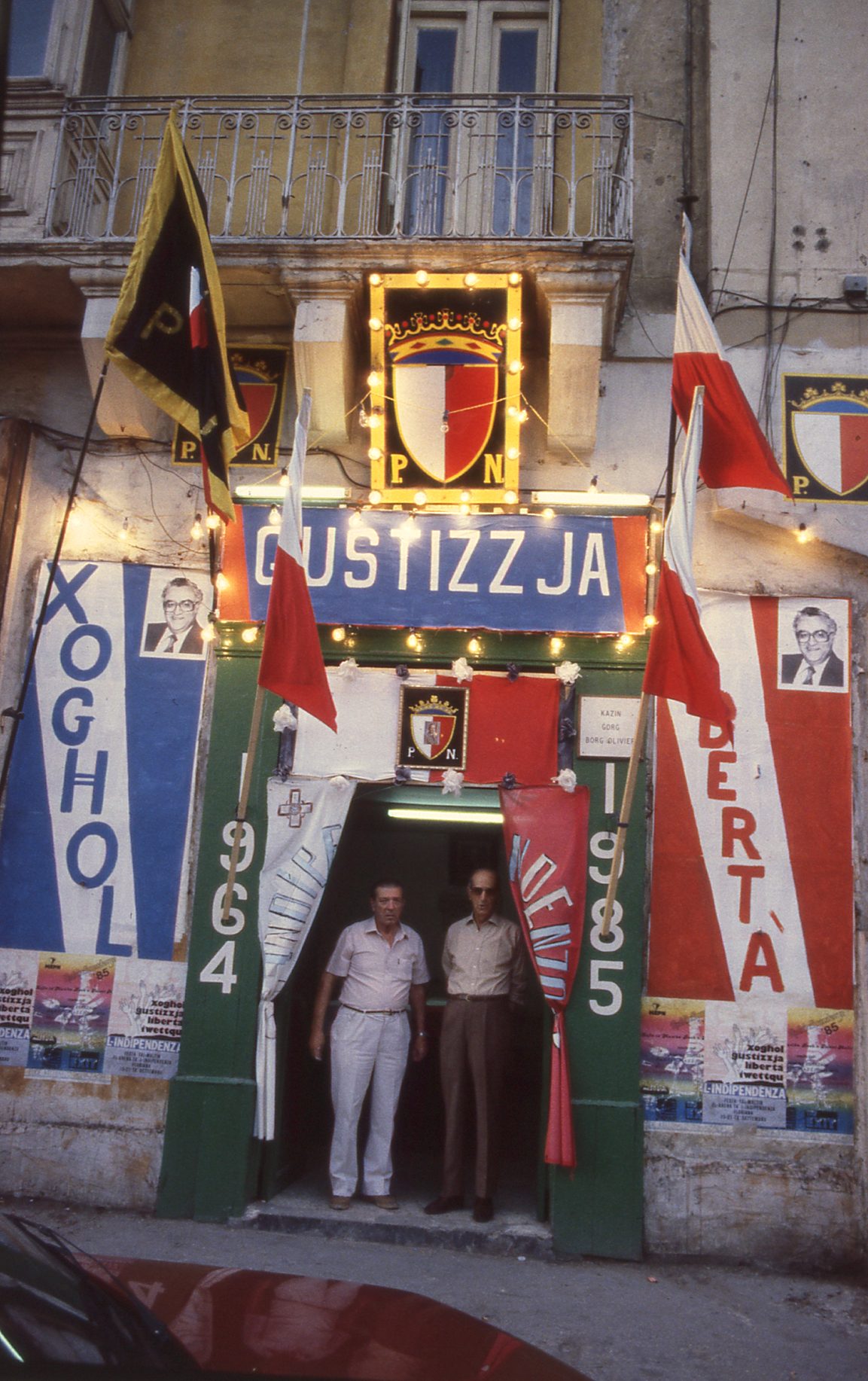 It was a different time – sometimes it’s hard to believe it all really happened and forms an essential part of our country’s recent history.  Yet those days and what the country went through must never be forgotten – and photos that froze those moments in time play an essential role in documenting and preserving our collective memory.