Henry Kissinger once said that the task of a leader is to get his people from where they are to where they have not been. This statement is a perfect description of what has inspired all the leaders of the Nationalist Party throughout Malta’s journey to achieve independence, entrench democratic values and proclaim our European identity.

Eddie Fenech Adami’s 27 year leadership of the Nationalist Party captures all of this.

I am one amongst so many other thousands who have been inspired by Fenech-Adami’s vision and determination to see Malta and the Maltese achieve what – at times – appeared to be beyond our reach.

I remain fascinated to this very day, by his strong conviction that this young and vulnerable island nation was capable of transforming what appeared to be impossible odds, into opportunities that allowed us to look beyond the constraints of our shores.

My generation was the one that faced the trials and tribulations of the seventies and the mid-eighties. I will not delve into the details of what we went through during those extremely difficult and trying years except for the fact that my wife and I were parents of three still very young children attending a church school and a private school.

Like many others we were extremely worried about the future of our children who were being raised in a country whose government was associating itself with the worst dictators of the time, where violence and corruption reigned supreme even in the most mundane of needs such as a telephone or a television and where the democratic result of an election had been usurped because of intentional gerrymandering of electoral districts by the regime prior to the 1981 general elections.

The frustration and hopelessness that we all felt at the time needed a message of hope – one that could shake us into action, believing in ourselves and in our ability to overcome what was intrinsically wrong. That was the time when we heard Eddie’s phrase “Is-sewwa jirbah zgur” which reminds me very much of the protest song “We Shall Overcome” that became a key anthem of the African-American Civil Rights movement. 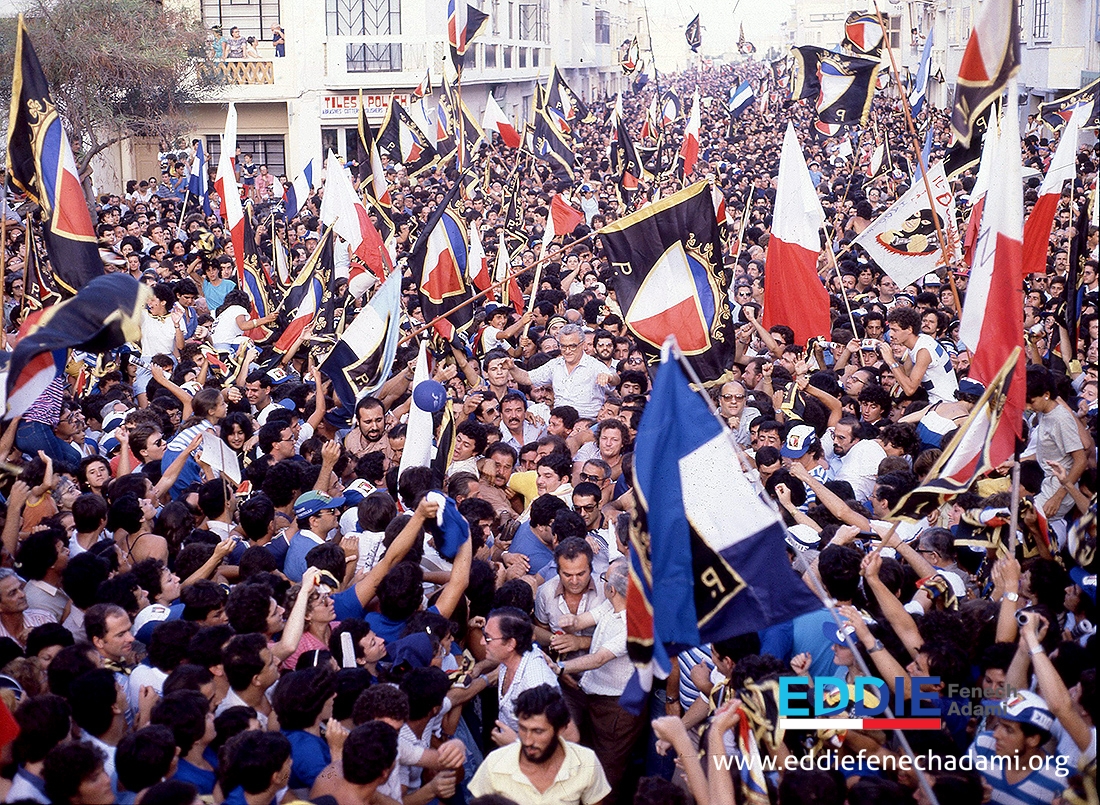 That was the time when Eddie’s leadership gave us all a glimmer of hope that we could bring change as long as we believed we ourselves could make it happen. Has constant use of the word “fiducja” was a rallying call that challenged us all to have faith in ourselves and in our country even if confronted by a regime that did not hesitate to use the brute force of a politically poisoned police force.

What made Eddie’s call a credible one ? Why did it sound genuine, sincere and honest to those of us – young and old – who gathered to listen to his message of hope on so many occasions?

The answer is simple – Eddie had proved to be a man of principle – a man whose values where not mere words used to sweet talk the crowds. His words were not pre planned soundbites couched in a way that masked the hypocrisy that is typical of all modern day populist politicians.

All of us – including his adversaries – knew very well that his words captured those values which he genuinely embraced in his private life, within his family, in his profession as a lawyer and throughout his political career.

He proved this to be the case on so many occasions but especially when his house was ransacked and his wife beaten; when the Times of Malta was burnt down by socialist thugs; when the Archbishop’s Curia was ransacked and desecrated; when he looked down on the lifeless body of young Raymond Caruana who was murdered in the PN’s Gudja Club and so on.

In other words when Maltese democracy was disintegrating and all seemed to be lost, Eddie’s call for us to stand and be counted was a call that we recognized and that inspired us to do whatever we could – not for Eddie’s sake, not for the Party’s sake, not even for our sake – but for the sake of a country which we loved and which we believed in.

This is the legacy that we inherited from Eddie’s leadership. This is where Eddie wanted to take us all : a place where we could understand what it meant to embrace genuine political commitment for the benefit of the common good instead of for the benefit of one’s ego or one’s pocket.

Is it a lasting legacy ? The answer depends very much on whether we all still believe in this country that has given us so much to be proud of and to whom we owe a debt of gratitude of immense proportions.