My journey through a lens with Eddie Fenech Adami

Eddie Aquilina
Eddie Aquilina is a seasoned book publisher with decades of experience in photography. He serves as a Director of Miranda Publishers who are pioneers in the large-format book publishing sector.

I started my political and photographic journey with Eddie Fenech Adami just after the stolen 1981 election. Like many, I was urged by the sheer injustice to a man who had been the people’s choice in that election, yet was still leader of the opposition because of electoral district gerrymandering. And of course, we had to then suffer further loss of basic rights, an economy going down the drain, enormous corruption and economic controls based on the Communist East Labour aspired to emulate.

That is why I decided to contribute to Malta’s quest for freedom and openness through my lens. Eventually, just before the 1987 elections, I published ‘Eddie l-Għażla tal-Poplu’, a photo album of those eventful years. Between 1981 and 1987, I must have taken around 10,000 slides of Eddie Fenech Adami. I was attending practically all functions – and there were many in those days – mass meetings were the main activities, but there were dialogue meetings, activities with women, the elderly, youths and workers, and many activities in party clubs, also opening several new ones.

I must give a little context with a note about the huge difference between photography today and 35 years ago: you needed film – lots of it – and you needed different types of film for different times of day and quality of natural light. It wasn’t easy taking photographs of events when you had to change film and possibly lose the moment for a good pic.

At first, in 1981, it was very difficult to capture Eddie Fenech Adami at the right moment with crowds and individuals – like many genuine politicians, he didn’t work for the camera but was focused on whatever he was doing. But as he came to know and appreciate the needs of photographers, he also started making allowances for us: slowing down his fast pace, especially.

Between 1981 and 1987, mass meetings got bigger and bigger in every corner of the land. From Marsaxlokk to Gozo, from the Fosos to Ta’ Qali – rain or shine, in hot or cold weather, crowds flocked to listen to Eddie Fenech Adami, chanting his name in an emotional and frenzied yearning for the stolen transformation that happened in actual fact after 1987.

Every mass meeting looked more like a worked up crowd in a football stadium – or a derby match. Week in, week out, young and old flocked to one of the few means of political communication back then. You have to remember that public broadcasting boycotted the Nationalist Party in those years. Mass meetings became a Sunday ritual to attend and listen to Eddie Fenech Adami explaining his vision for Malta and promising that truth will prevail.

Mass meetings as an experience

The scenes were unbelievable. Everyone seemed to want to grab hold of Eddie Fenech Adami as he made his way from the back of the mass meeting onto the podium on a land rover; men – young and old – with children or girlfriends carried shoulder high reaching out to touch or shake hands. Admiration for the man and his vision was everywhere. I was very fortunate to witness many memorable scenes from very close by.

The crowd would swing from left to right and back. Luckily, no one ever got seriously injured. Eventually, when he did get onto the stage, again the crowd would shout and clap and almost silence Eddie Fenech Adami who would struggle to talk over the noise.

And you had all the context of mass meetings then: not just the huge crowds and the sheer noise but also the decorated balconies, windows, roof tops packed with people, streamers from one side of the road to the other, party flags, blue flags known as ‘tal-maġġoranza’ and numerous home-made placards that summed up the situation in Malta back then.

Of the 10,000 pictures I must have taken in those eventful five and a half years, I still treasure a few above all: 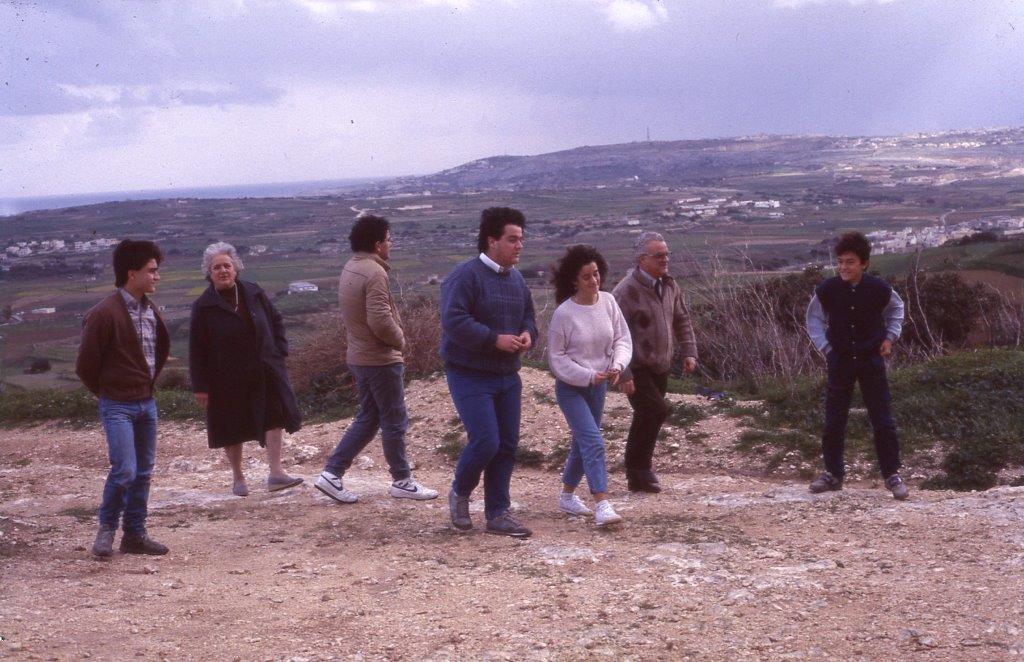 Eddie Fenech Adami with his family in Bidnija 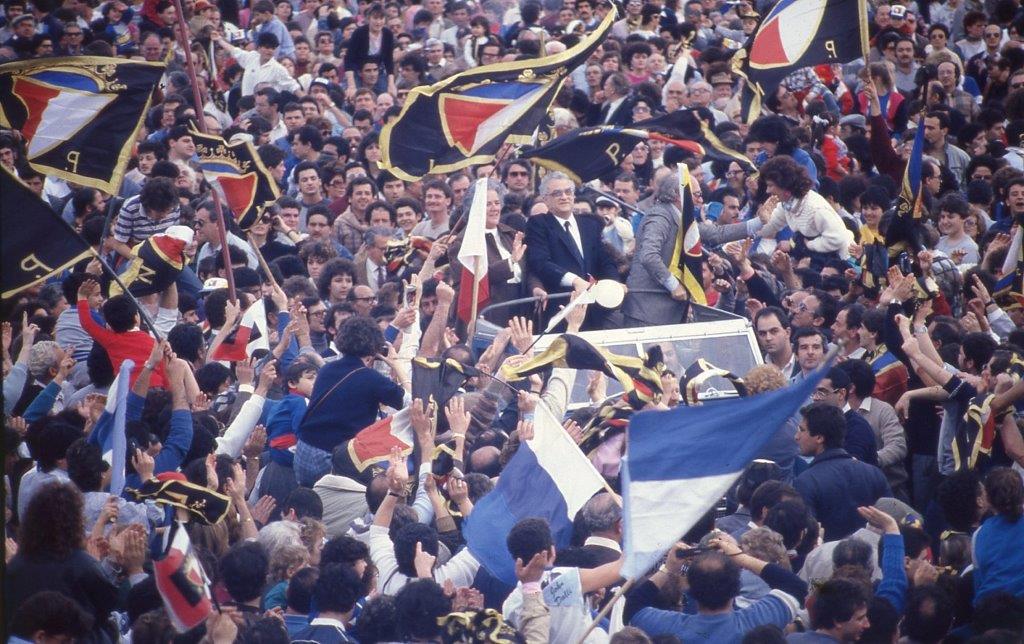 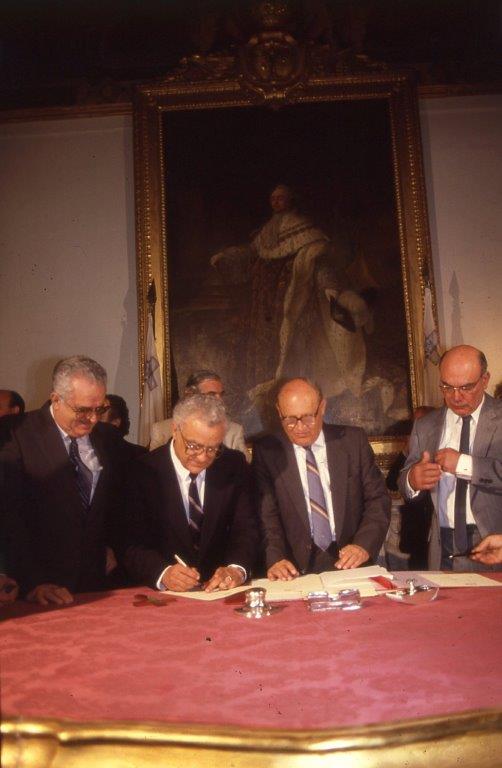 Being sworn in as Prime Minister 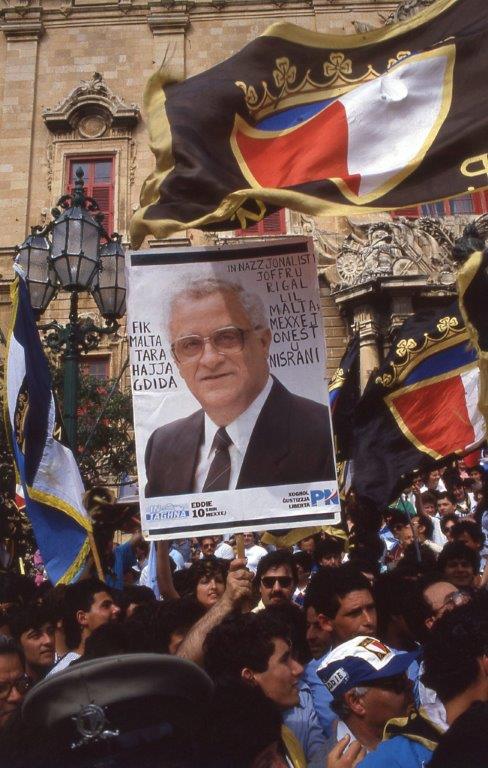 This poster summed it all up: Eddie Fenech Adami delivered a new way of life, as The Brotherhood of Man had sung on the eve of the 1981 election in the Gżira Stadium.

The open, modern, European Malta we live in is thanks to Eddie Fenech Adami and the many good men and women he gathered around him and who, in that most important election in 1987, steered Malta towards the values of liberty and solidarity in the free country we so deeply yearned for in the preceding years.

I’m privileged to have charted that momentous journey through my lens.