When Eddie became Leader of the Party he inherited few and rather loose relationships with other political Parties belonging to the same political family as the PN, namely following a Christian Democratic ideology. His predecessor, George Borg Olivier took a rather pragmatic approach to such Associations.

However, considering the erratic behavior of Dom Mintoff and his Government with regards to their foreign policy, it was clear from the start of his mandate, that Eddie had to start forging closer and tighter relationships with sister parties, more importantly with those in Government.

The close relationship with Gaddafi’s Libya, the approaching end in 1979 of the Defence Agreement signed by Mintoff in 1972, and the PN’s ambition to eventually see Malta as part of the European Community, made Eddie aware that he needs to cultivate the friendship of the Leaders not only of sister parties but of all main political actors, especially in Europe, for them to better understand the state of affairs in Malta while in this way invest in such relationships for future use once the PN attained Government.

Thus Eddie took an active role in attending all meetings of the European Union of Christian Democratic Parties (EUDC) becoming eventually Vice President of the Group, was the guest speaker in a number of Party Congresses and kept close contact with especially leading European political members at both national Parliament level and at European Parliament level.

The PN, at some expense, hosted in Malta a number of political gatherings as it was very clear to all that once people visited Malta and saw at first hand the reality on the ground, they tended to return to their country with a better appreciation of the problems Malta and the PN were facing as well as understood better the arguments Eddie and others in the Leadership of the Party were saying in the various European fora

To widen the circle of friends of the PN, it was decided to join the newly set up European Democratic Union (EDU) that for the first time brought together Christian Democratic Parties with Liberal and Conservative ones. This was not a easy decision to take and the Executive Committee of the Party held long debates about whether to join or not, but it was realized that with the PN in Opposition and in the light of the actual situation in Malta as well as the PN’s future ambitions, joining was a must. Thus the PN finished as one of the few Christian Democratic Party belonging to both EUDC and EDU. With time, once the PN entered Government, this membership proved to have been a good decision.

Eddie increased his European activities when the Executive Party resolved that once the PN enters Government, a formal request will be made for Malta to join the then European Community. The most important support was the one obtained by the Christian Democratic Union (CDU) in Germany and a joint press conference was held by Eddie and the then Secretary General of the CDU Mr. Heiner Giessler,  in which this support was made public.

An important addition to this foreign activity was the setting up in Malta of AZAD, the think tank of the PN with the support of the Konrad Adenauer Foundation. Censu Tabone, then Deputy Leader of the PN took an active role in leading AZAD and over the years a number of young future leaders in the PN received sound training in various sectors of politics and public life. AZAD was also very important in preparing drafts of policy documents that were eventually used as the basis of the 1987 Election Political Manifesto. 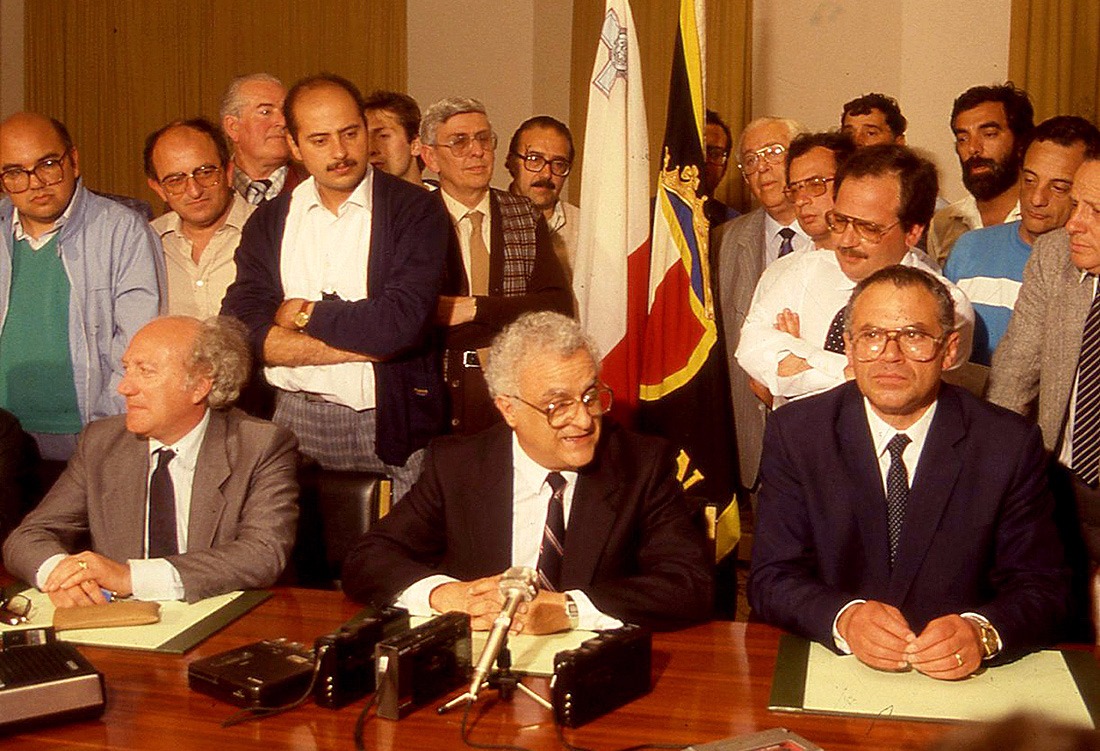 The only political forum in Europe open to the PN was the Parliamentary Assembly of the Council of Europe. The PN Members of this Assembly took an active role in keeping the state of affairs in Malta ever present in debates both at plenary sessions as well as in Committee meetings. Eddie was invited to address such gatherings on a number of occasions. In time, with the PN in Government, such contacts proved to be a good investment.

Having worked close with Eddie in my role as International Secretary of the PN, I must say that over the years, that is from 1977 to 1987, I did see this Leader become more convinced of the heavy burden he was carrying as Leader of the PN in the rather grave developments for democracy in Malta and thus in his foreign relationships and contacts over the years he become bolder and more assertive in the light of the urgency of what was happening back home. When the PN achieved a majority of votes in 1981 but not a majority of seats due to the gerrymandering of the electoral bounders, it was clear to him that while the fight for democracy was local, keeping foreign political leaders aware and abreast with developments in Malta was a must.  Thus his travels abroad increased and I can affirm that the support the PN got out of these visits proved important and beneficial in the eventual victory of the PN in the election of 1987.

Though to many people who do not know Eddie well, the man seems rather distant and reserved, in my experience, his belief in a better future for Malta, his certainty that Malta’s place was in the European Community plus the urgency of the need for a change of Government in Malta, turned the man in the most charming and convincing of persons in his foreign activities and this made certain that Malta remained in the forefront of European politics.