Leading the PN to victory in 1987: Eddie’s style of leadership

Louis Galea
Louis Galea was Secretary General of the Nationalist Party from 1977 to 1987. A lawyer by profession, he has devoted most of his energies to politics and has served in various roles including that of Minister in Eddie Fenech Adami's cabinet. More recently he served as Malta's representative to the European Court of Auditors

In the late 1960s, I was very active in student politics and thinking seriously about pursuing a vocation in national politics. Within the Nationalist Party, three men of the younger generation stood out. Guido De Marco was, nationally, the more visible. Ugo Mifsud Bonnici was someone I much admired from afar. Then there was Eddie, who began increasingly to attract my interest.

He entered Parliament by co-option in 1969, slightly later than the other two. At first, he was not generally considered to be a potential leader, nor did he seem to harbour leadership ambitions. He shrugged off the trappings of power. A father of five, he enjoyed the companionship of his wife Mary, relaxing by tackling maintenance odd jobs at home, on his car and his boat. He was so unpretentious that it was easy to forget (as some did) that, before politics took over the whole of his professional life, he was one of the leading legal practitioners in the field of civil law.

In many ways, he was just what he seemed: the product of a middle-class, staunchly Catholic family from B’Kara, and the student social action movement, which helped him develop a clear world view inspired by Catholic social teaching, with its emphasis on justice and solidarity. But it was soon apparent to anyone who looked closely that, behind this somewhat staid-seeming make-up, was a steely, courageous character, with a cerebral mind as well as a conscience rooted in fundamental values. The detachment from leadership was deceptive, too: he was prepared to lead if necessary, by preference from the back with a loyal team spirit.

None of these three rising stars – Guido, Ugo, Eddie – sat in Giorgio Borg Olivier’s cabinet. Borg Olivier had just ‘fathered’ Malta’s Independence, in 1964, and under his leadership Malta was being transformed from a British colony into a modern State, enjoying political stability, a growing economy, a developing network of social services, and a vibrant cultural environment. But, for various reasons, he narrowly lost the 1971 general election to Dom Mintoff’s Malta Labour Party. 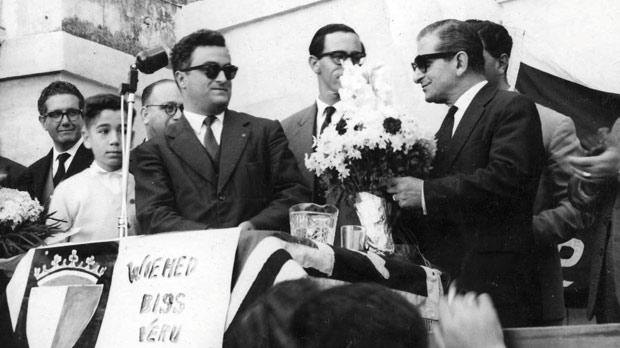 In Opposition, Guido, Ugo and Eddie all began to take on more senior roles in the PN. Eddie, who had an excellent grasp of economics as well as law, rapidly became a leading spokesman on social and economic affairs.

The PN lost the 1976 general election as well. In February 1977, the party voted for Eddie Fenech Adami to succeed Borg Olivier. He was soon sworn in as Leader of the Opposition. Having myself been elected Secretary-General, I was now able to observe him from up close.

He became leader at a difficult time in Malta’s history, where all the country’s major institutions seemed to be on the road to ruin. As the 1970s turned into the 1980s, there were increasingly autocratic undemocratic practices marked by unchecked political violence and corruption. Social and economic development was muddled and workers’ rights disdained. The University of Malta was dismembered. Maltese medical doctors were dismissed en masse after going on strike at State hospitals. Church schools were closed. The Archbishop’s Curia was attacked and vandalised. The Times of Malta building was burned. The State broadcasting media blatantly promoted Labour propaganda. The period was bookended by two horrific murders – of a teenager, Karen Grech, and a young man, Raymond Caruana – whose killers were never brought to justice.

In this atmosphere of sheer vindictiveness and intolerance, even Eddie himself was targeted. His home was smashed, his wife Mary was brutally beaten, and his terrorised children had to escape by jumping over to a neighbour’s roof.

At the 1981 general elections, the PN obtained more than 50 per cent of the popular vote (for the first time since 1932) but Labour retained a majority of seats in Parliament thanks to flagrant gerrymandering. Malta’s political and economic situation, already in dire straits, was to get much worse over the next five years.

In such an explosive atmosphere, many wanted the PN to meet Labour blow for blow. Eddie thought otherwise. He read Maltese society differently, assessing that what was needed was not just firm, unbending opposition but also a different style of leadership.

Eddie was a complete contrast to Mintoff. The latter was autocratic, arbitrary, scheming, colourful, voluble, populist, coarse, volcanic, sliding from one extreme to the other, power-hungry from his earliest days. Mintoff’s success also shaped popular expectations of what a leader should be.

Eddie crafted a leadership style in contrast with the popular expectations. In doing so he also reshaped many people’s idea of leadership and, with this change, began to win the political battle.

He was a leader whose values were grounded in the supremacy of the rule of law, while not being legalistic. He was well read, patient and an attentive listener. He learned how to read the evolving dynamics of Maltese society, and showed he was ready to evolve with them, even acting energetically to enact necessary changes once convinced.

Addressing mass meetings, he appealed to people’s minds, with facts and figures in hand, with the ability to weave a narrative out of the facts in which people from all social strata could find a place. He rarely displayed his own emotions but could speak with such authority that he evoked the strong emotional support of the masses.

It was not just a matter of oratory. It was the result of a deliberate two-pronged strategy: engaging the people in a process that raised political awareness, and then engaging with the different sectors of society, in a process of genuine dialogue, to understand and analyse the underlying situation and formulate credible and viable alternatives.

The dialogue would not have been possible without a form of organisation that corresponded to the new, emerging social forms, that knew how to recognise talent and gave it the opportunity to flourish.

Eddie Fenech Adami was at the heart and soul of this movement. He never let it go to his head. He articulated a vision that was embodied by the team that implemented its strategy. Its credibility led to the 1987 electoral victory.